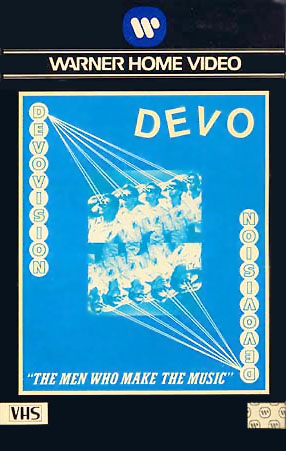 The Men Who Make the Music was the first home video released by Devo. Finished in 1979, the film was set to be the first Video LP, but was shelved by Time Life due to concerns about its anti-music industry content. It was released in 1981.

The film takes place mostly in General Boy's office, where he fills the viewer in on the philosophy behind the theory of De-evolution. Cutaways to Devo members also serve this purpose, allowing Devo, themselves, to explain some of the more minute details. General Boy's speech is interspersed with live footage of Devo in concert, as well as a few music videos. The film ends with footage of Booji Boy performing "Red Eye" in concert with Devo and a reprise of the Devo Corporate Anthem.

In between the music video to "The Day My Baby Gave Me a Surprize" and concert footage of "Praying Hands" is a short segment, called "Roll Out the Barrel/Rod's Big Reamer" (approximately six minutes in length), involving Rod Rooter of Big Entertainment (Michael Swartz). In it, Daddy Knowitall, Rooter's boss, demands that the latter "get them back into their yellow suits" or he would be fired. Whilst the band are watching a slideshow of grotesque skin diseases at Devo Inc., they receive a call from Rooter, ordering them to meet at his office in fifteen minutes. Jerry, Mark, Bob 1, and Bob 2 go to Big Entertainment whilst Alan opts to meet them later at Club Devo. Before Devo arrive at the office, Rooter's secretary, Penny, is seen with a couple (whose faces are never seen), providing them with an envelope (presumably containing money).
When the band arrives, Rooter is listening to a song by a new band, Parcheesi, called "Midget". He tells them that particular single was a platinum hit on release and asks, semi-sarcastically, why Devo's music does not perform as well. He proceeds to criticise the band for their "artistic" behaviour and finally kicks them out when Booji Boy (Mark Mothersbaugh) shows up and essentially accuses him of being a slave to his job.
At Club Devo, Alan asks how the meeting went. Jerry remarks that it's "hard to sit down". Mark seems convinced that everything will change when they get their own recombo DNA lab.

Unbeknownst to them, the couple who were paid by Rooter are also present and are recording their conversation. "A short time later", Jerry appears and states that Devo wear the yellow suits not as a fashion statement but as "protective gear".

(* Excerpt from In The Beginning Was The End: The Truth About De-Evolution)

Retrieved from "https://devo.fandom.com/wiki/The_Men_Who_Make_The_Music?oldid=7589"
Community content is available under CC-BY-SA unless otherwise noted.